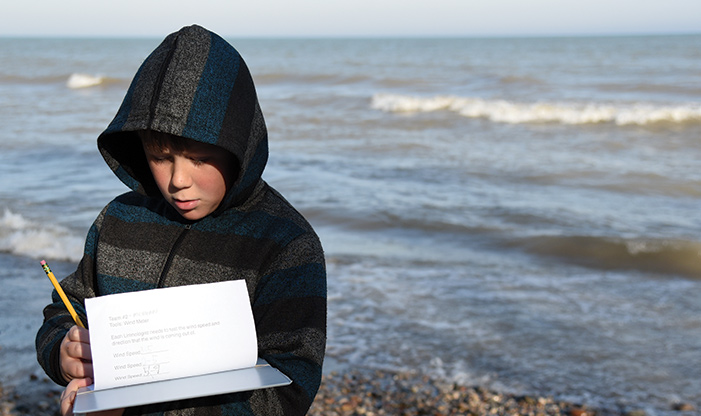 How great are the Great Lakes? Our All Day Great Lakes program, an onsite fieldtrip designed for students in grades 4 – 8, begins with this question as we focus on the health of the Great Lakes.

Lakes Superior, Huron, Michigan, Erie, and Ontario form the largest freshwater system on Earth, containing approximately six quadrillion gallons of freshwater. Even though our planet is 78% water, 98% of that is saltwater. And most of the remaining 2% is locked in polar ice caps or underground aquifers. The Great Lakes possess 20% of our world’s surface freshwater and 11,000 miles of shoreline – more than the entire Atlantic and Pacific coasts combined.

Rather than teaching about the lakes as individual entities, we explain that they are one large moving system of water. Students work in five groups (one for each lake) to collect lake vitals such as air temperature, wind speed, water temperature and pH level. Students also sample the water for coliform bacteria such as E.coli.

We then scour the beach for garbage, from the smallest pieces of plastic and Styrofoam, to a 10-pound rusty metal pole we once found washed ashore. Each group gathers as much garbage as they can find, and we take it back into the classroom where we dissect and inventory each piece. Our findings are submitted to the Alliance for the Great Lakes, an organization that works with beach adopters of the Great Lakes. This information is used to assess the health of the lakes, and where they need assistance.

Over the past four years, we’ve removed more than 5,400 pieces of trash, weighing 187 pounds from our Lake Michigan surf, beach, and watershed. More than three quarters of it was plastic. Students have made sure that 4,150 pieces of plastic did not end up in the bellies of birds above the water and numerous fish species below.

Great Lakes water eventually makes its way to the Atlantic Ocean through the St. Lawrence Seaway, where many creatures, such as the Beluga Whale, live in this brackish water. In recent years, those Beluga Whales have developed instances of cancer where there previously had been none. Polluted water from the Great Lakes is the suspect. Litter follows the water cycle, as do other forms of pollution, such as atmospheric pollution and non-point source pollution. Keeping our water as clean as possible is the driving motivation for our All Day Great Lakes class.

Students also build a watershed on the beach with buckets, shovels, and trowels. We create landforms: ravines, river valleys, lakes, rivers, streams, islands, and peninsulas. Then we fill our watershed and witness the water ebbing, flowing, eroding and altering the formations. Our watershed becomes more complicated by accidentally “polluting” it with toxic sludge (food coloring) that we try to contain, but becomes breached by erosion due to moving water.

Our students learn to appreciate the forces we can’t control, but they learn about the impacts we can. Together we keep Lake Michigan, and its connected bodies of water, GREAT!